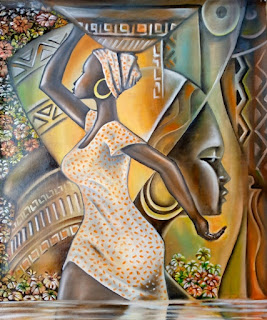 Sleight of hand, the good old trick revenant on every return. I sat across the bar observing as he lied his adulations, his words rolling with the fluidity of well-oiled wheels. She giggled, fingers across her mouth, a fancy attempt at covering her blush.

The wine had flowed red, crimson-red but not all the way to raspberry. Her ears had heard their fill, and her heart well-drawn out. He had tipped the waiter in clean bills, his 'goodness' advertised for good measure. Now Cupid wouldn't miss, even at old age, failing eyes, and unsure aim, this maiden's heart was so nowhere to not be found.

The petals were purposefully scattered  from door to bed, like ants on the trail of industrial sugar. Two scented candles burned generously at both sides of the bed. She jolted to a halt upon the sight of 'Will You Marry Me?' neatly created with neon light on the wall across the hotel room.

He was on one knee, ring stretched out, waiting for her approving finger. The tension was thick, almost tangible. "Yes" seemed customary. "No" seemed a crime, or at least a tort. She was seconds away from sealing her matrimonial fate.

Just then the sound of an incoming phone call interrupted proceedings. The worst possible timing. He struggled with his side pocket, brought out the telephone. An open ring box on one hand, phone on the other hand, he declined the call quickly and went back to the moment.

She said 'Yes', and with two tear drops dribbling down the sides of her face, she hugged and kissed him. One good kiss deserved another, and from there they went down that famous path legally reserved for a married couple.

At the middle of the night, when they were clasped within each other's cuddle, and he was fast asleep, the phone call kept coming. She suddenly took interest in the call when she saw the name. "Mrs XYZ",  the name of the caller was a curious one, and when finally a voicemail came in, she decided to have a listen, of course, her future husband wouldn't mind. The recorded voice was of a woman asking why he had delayed coming back home, complaining that their second child had fallen ill, and that he should call her back as soon as he got the voicemail.

The man was snoring away while his secret was being made known.He was a married man for whom no price was too high to pay to satisfy his appetite for more. He had retained a strong desire to get our mystery maiden to the bed, but she would never agree to his advances unless he put a ring on her finger. Quite the time, Valentine's, ring on finger, sex on a platter, and that went off the bucket list.

She dropped the phone with new tears, but this time not of joy. Good ring, fake stud, fake love, bad market. This happened tomorrow.