WHEN TOGETHER IS NOT BETTER 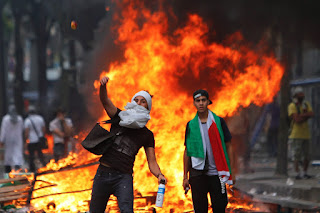 And so time came when men softened, and with it the words of men. We began to talk of love and more love, and hate became a crime. We looked at rainbows and celebrated the colours. We hugged and kissed as though heaven had come on Earth. I have heard it said that man is made of earth, but we were soon forgetting what live beneath these lands; the earth eater, the shape shifter, the behemoth, Leviathan, the vilest of Orcs-Azorg and Bolg, and Gollum obsessed with Sauran's ring.
Oneness has been utopian, and unity saintly but so has the heart of man remained desperately wicked. With Good and bad, diplomacy equates compromise, and with light and darkness, we have the different shades of gray, and light is either now less light or no light.
Also, isn't there a reason why we are not one colour, one language, one world order? Isn't there a reason why you speak English and I speak Dothraki? Isn't there a reason why my mother wants a Sari and the Queen goes for her hat? Of course, there has to be a reason, a God-ordained reason, a nature-enforced reason. Yet in the fantasy of this convoluted softness, some began to close their eyes to the obviousness of differences. They said 'Bridges not walls' and threw their doors open. But reality has dawned between then and now, and it is clear that the multicultural experiment in Europe would always be a failure, just as it has always been in Nigeria.
We are all beasts with different degrees of vileness and bestiality. We are all mad with different degrees of madness. Yet we are all human still, we all love, we all hope, and we all believe, all in different degrees. But still while some crow, others bleat, while some roar, others chirp. Yes, while some bow to the cross, others, those who face the east hope to break it at the the end of time. We mustn't forget these degrees and differences. Some have said to forget our differences, oneness, they said, and while at it the lion's den became the horse's stable, the goat's pen, the fowl's cage and the hyena's playing field. The morning after was calm, there was no bleating of goats, no cock's crow, the horse was nursing his wound, the hyenas were laughing, and well, you can guess what the lions had for dinner.
There is a reason why when we build our homes, we build walls and not bridges around it. We cannot pretend to be living in Al Jannar or the heavenly Jerusalem, this is no Valhalla, there are beasts on the streets, beasts of different bestial degrees and types, and we must behind our gates vet who we let into our homes.
If the world be a zoo, then let the lion have his den, the horse his stable, the sheep their pen, the fish their water, the ape his cave and man his home.
Again I ask, do we forget our differences or do we recognize it, respect and honour it? Whatever we decide we must not forget that together is not always better.
- June 10, 2017